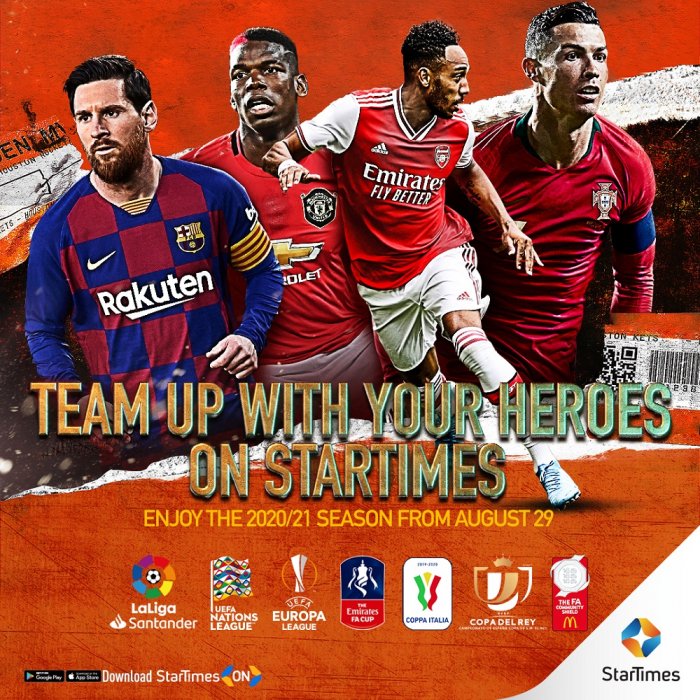 2020 is indeed a special year. It is the year football fans around the world had to live without football during several months while staying home. It is the year players had to play in empty stadiums without fans shooting and singing. Things have been slowly returning back to normal. And August 29 will mark another step toward the return of football as we love it with the beginning of the new 2020/21 season.

Digital TV operator StarTimes will celebrate the new season by broadcasting live and in HD the first game of the season, the FA Community Shield.

It will be contested this Saturday at Wembley Stadium between Premier League winners Liverpool and the winners of the 2020 FA Cup, Arsenal. The Gunners defeated Chelsea 2-1 in the FA Cup final on August 1.

Just before that, on September 3, StarTimes will start airing the UEFA Nations League. The second edition of UEFA’s newest national-team competition will begin with great clashes such as Germany vs. Spain, Sweden against France and titleholder Portugal vs. Croatia.

In terms of European events, StarTimes will keep broadcasting exclusive the UEFA Europa League. The final played on August 21 saw Sevilla beat their own record with a sixth Europa League title.

Football has been at the core of StarTimes’ sport content strategy these last years and this rich offering highlights StarTimes’ commitment to provide the best football experience to its users.

The digital TV operator is making sure that football fans across Africa can enjoy premium football games every week until the long-awaited UEFA Euro 2020 in June 2021.

The company’s vision is "To ensure that every African family can access, afford, watch and share the beauty of digital TV".

Watch LaLiga on StarTimes - Real Madrid get their campaign under...

When Real Madrid take to the Reale Arena in the city of San Sebastián on...
INKURU ZAMAMAZA
17 September 2020 Yasuwe: 214 0

In 1xBet online betting in internet has become a full-fledged...