Watch Bundesliga on StarTimes Bayern marching towards the title 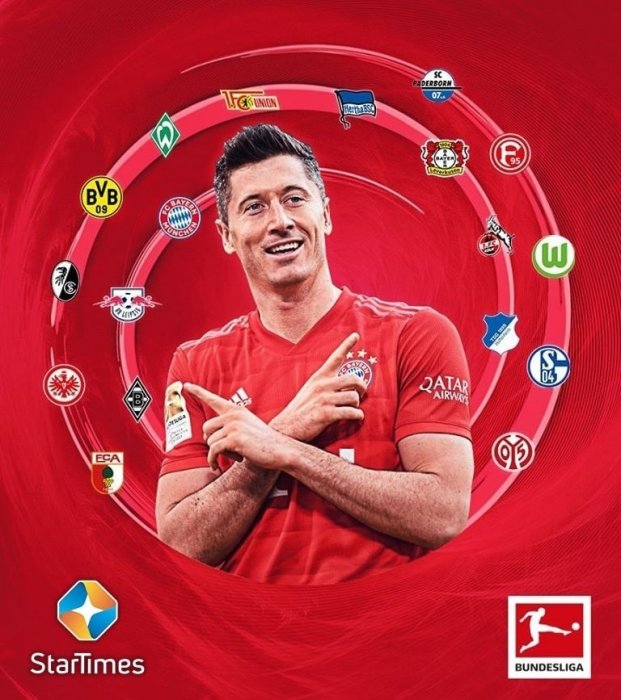 After winning in Dortmund and following that up with a comfortable 5-0 victory against struggling Düsseldorf on the weekend, Bayern München are marching towards an eighth successive title.

This coming weekend, Bayer Leverkusen are the team desperate to halt – if even momentarily – that march.

Peter Bosz’s side have been blowing hot and cold since the restart of the season, winning their first match 4-1 at Werder Bremen and 3-1 at Borussia Mönchengladbach, but then crashing spectacularly at home against Wolfsburg before finding back to their winning ways at Freiburg on Saturday.

In Kai Havertz, Leverkusen have one of the most exciting young players world-wide and the 20-year-old German international is being linked with some of the biggest clubs in Europe.

After scoring the winning goal against Freiburg and in the process becoming the first player under 21 to have scored 35 Bundesliga career goals, Havertz had to be substituted with an injury.

Bosz though is hoping that he will be ready to face Bayern Munich. “He is well. I don’t know how serious it is, but I think that it will be fine.”

Bosz has used the advantage of playing behind closed doors to play 17-year-old Florian Wirtz, who took over the record of the club’s youngest-ever player from Havertz. Wirtz has been able to gain match experience without facing pressure from the crowd and has started twice already.

Their opponents in the BayArena on Saturday, Bayern Munich, arrive on the back of eight consecutive Bundesliga victories, scoring an astonishing 28 goals in the process and conceding just five.

Against Düsseldorf star striker Robert Lewandowski scored his 29th goal of the season, leaving him just one shy of his personal best of 30, which he managed in the 2015/16 and 2016/17 season. With five matches remaining in the season, he will have several opportunities to grab the goals.

Also needing goals are Borussia Dortmund, who remain the only club with a realistic – albeit unlikely – chance of still catching Bayern. The Black and Yellows are at home against Hertha Berlin in Saturday’s late match, knowing that any further slip-up will all but kill their hopes of winning the title.

This weekend StarTimes once again brings African football fans the best of the Bundesliga – live and exclusive on the StarTime football channels.

With so many not-to-be-missed matches, the Bundesliga continues to provide footballing highlights to fans throughout Africa. Peter Auf der Heyde

Peter Auf der Heyde is an award-winning football journalist and author, who covers the big European leagues. As a South African by birth, he is particularly interested in the African connection within European football and has covered 12 consecutive Africa Cup of Nations tournaments live.

Formerly head of sport at the English service of the German Press Association, he is one of the leading Bundesliga experts.

Press Release – Updated Education Sector of StarTimes ON to serve users of...

CBEEBIES LAUNCHES ON STARTIMES ACROSS THE AFRICAN CONTINENT FROM WEDNESDAY...

Watch Emirates FA Cup with StarTimes, Only eight teams remaining in the FA...

By Peter Auf der Heyde There is no competition throughout the world that...
INKURU ZAMAMAZA
23 June 2020 Yasuwe: 351 0

Press Release: StarTimes is getting IN FOR AFRICA on Africa...