Euro 2020: All to play for between France and Portugal on StarTimes 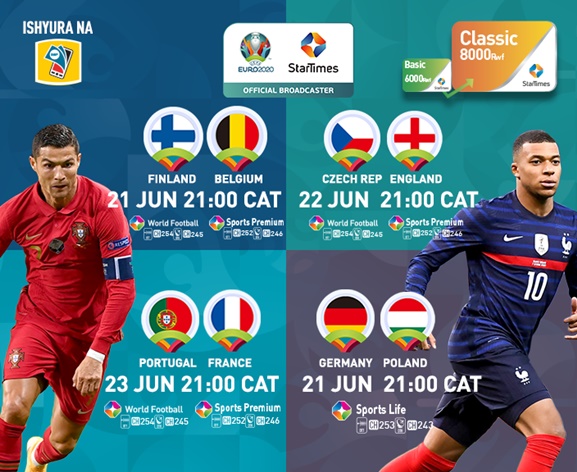 The Euro 2020 group stage ends on Wednesday with crucial matches in the Group of Death. European champions Portugal face world champions France to get qualified for the knock-out stage, since Ronaldo and Mbappé’s teams failed to win their second group match. The match will be aired live on the StarTimes sport channels.


Football fans are used to expect the unexpected. And that is exactly what happened in the so-called Group of Death at Euro 2020.

The 2016 finalists France and Portugal meet in the Puskás Aréna in Budapest on Wednesday and after their opening games, their fans thought that both Les Bleus and the Seleção would have already qualified for the knock-out stage by the time they face each other.

But in their second matches the unexpected happened.

France needed an Antoine Griezmann goal midway through the second half to draw 1-1 with Hungary, while Portugal gave away a Cristiano Ronaldo lead in Munich against a rampant Germany that ended up winning 4-2. It was the first time that a title holder conceded four goals.

The results leave France topping Group F with four points, Germany and Portugal both have three points, but Germany are second on the head-to-head basis. Hungary have one point.

This leaves the group wide open ahead of the final round of group matches, with all four teams still having a chance to progress. But with the likes of Ronaldo, Rúben Dias and Bruno Fernandes on the one side and Griezmann, Kylian Mbappé, Karim Benzema and Paul Pogba on the other, it is not surprising that most of the neutral fans will focus on the rematch of the 2016 final.

Portugal, who won the 2016 final 1-0 through Eder’s extra-time goal, will feel the pressure ahead of Wednesday’s game. The Seleção will expect Germany to avoid defeat at home against Hungary, leaving Portugal needing to beat France if they want to finish in either of the two places that would guarantee a place in the round of the last-16.

Although the top four third-placed teams from the six groups will also advance to the knock-out stages, they will be facing a group winner in the next round. Portuguese coach Fernando Santos took the blame for the defeat against Germany, but remains confident. “Whether we progress or not is still up to us. And we must respond against France.”

But if Portugal have some pressure on them, France will also be feeling the heat. A defeat or draw for them and a victory for Germany would see Les Bleus slip from first to third and anxiously looking at the results from the other groups. A win for Didier Deschamps’ team on the other hand, would secure a game in the next round against a third-placed team.

Deschamps, however, might be without Barcelona’s Ousmane Dembélé, who had to be taken off with a knee injury after coming on as a substitute against Hungary. With so much at stake, football fans will be spoilt for choice as both games are being player at the same time. But African football fans need to miss none of the best action as the Euros are being shown live and in HD on the StarTimes channels.