There are few matches – if any – that grab the world footballing headlines as much as the El Clásico.

Barcelona against Real Madrid – it hardly gets any bigger than when these two LaLiga giants meet, as they will play on Saturday in the Camp Nou in Barcelona. For both teams, the league has not been going according to plan.

On the weekend, Real Madrid was beaten 1-0 at home by newly promoted Andalusian club Cádiz, while Barcelona was beaten by the same score by Getafe, leaving Blaugrana in ninth position on seven points from their four matches. Real Madrid, meanwhile, are third with ten points, but have played a game more than Saturday’s opponents.

Barcelona fans are worried that their star performer – Lionel Messi – has found scoring much more difficult than in previous seasons and after scoring from the penalty spot in their season-opener against Villarreal, has now gone three matches without finding the net.

This has not gone unnoticed for new coach Ronald Koeman. “Maybe, at the moment, Messi’s performances could be better.

"But he is happy, he is working hard and he wants to be the captain. I don’t have a single complaint. He has also had some bad luck. He hit the post [on the weekend in the defeat against Getafe] and on another day that goes in.

"I don’t have any doubts about his performances and we’re going to see him [at his best] in the upcoming games, I’m sure."

Messi at his best in El Clásico is something that Barcelona fans will be hoping for. No other player has scored more goals in the matches between the two clubs – Messi has 26 goals, 18 of which were in the league – and he comfortably beats Real Madrid legends Alfredo Di Stéfano and Cristiano Ronaldo by eight goals.

And only one player, Real Madrid’s Sergio Ramos, has played more games in the El Clásico than Messi, with the Argentinian being on the winning side 19 times in 43 matches, with 11 draws, while Ramos has played three games more, but won five games less.

There was some doubt over Ramos’ availability for this weekend’s match after the defender was taken off with a knee injury on the weekend, but he has since been cleared to play.

Real coach Zinedine Zidane will, however, be without playmaker Martin Odegaard, who picked up a calf muscle problem playing for Norway during the international break.

The 21-year-old is expected to be out for two or three weeks.

The two teams have played against each other 244 times in competitive matches, with both clubs winning 96 of these. Real Madrid holds a slight advantage when it comes to LaLiga matches, having won 73, compared to Barcelona’s 72.

Football fans throughout Africa will be able to see whether Barcelona can pull level with their big rivals as the game will be broadcast live and in HD on the StarTimes football channel.

Africa’s leading digital-TV operator is showing all the best action from the LaLiga and it hardly gets better than the El Clásico. 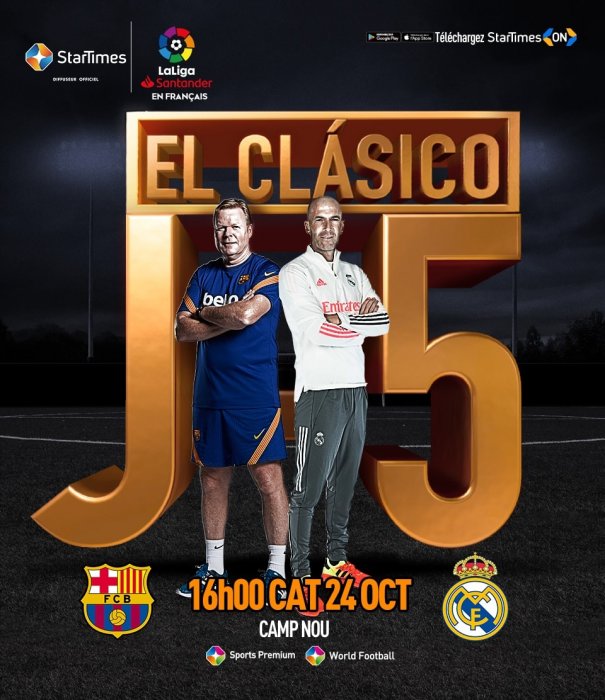